A DIFFERENT KIND OF SPICE JOURNEY

That's a latte history
Pumpkin pie spice has traveled a long road from 14th century Indonesia and early colonial “pumpion pye” to your local Starbucks, where it makes a seasonal return in the company’s signature PSL (Pumpkin Spice Latte) each fall. There is archaeological evidence, in fact, to suggest that spice combinations that would one day culminate into the version found in the baking aisle of any grocery store today were in use more than 3,500 years ago.

Still, it wouldn’t be until 17th century that what we recognize as pumpkin pie spice would be introduced to the humble North American winter squash, and nearly another 200 years before pumpkin pie would become an American Thanksgiving tradition. 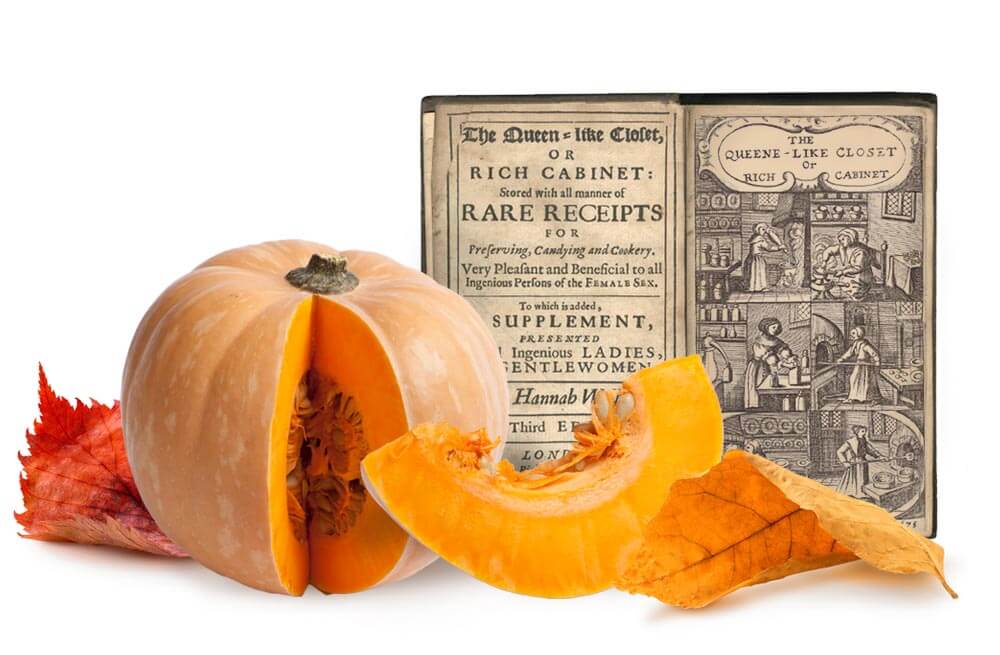 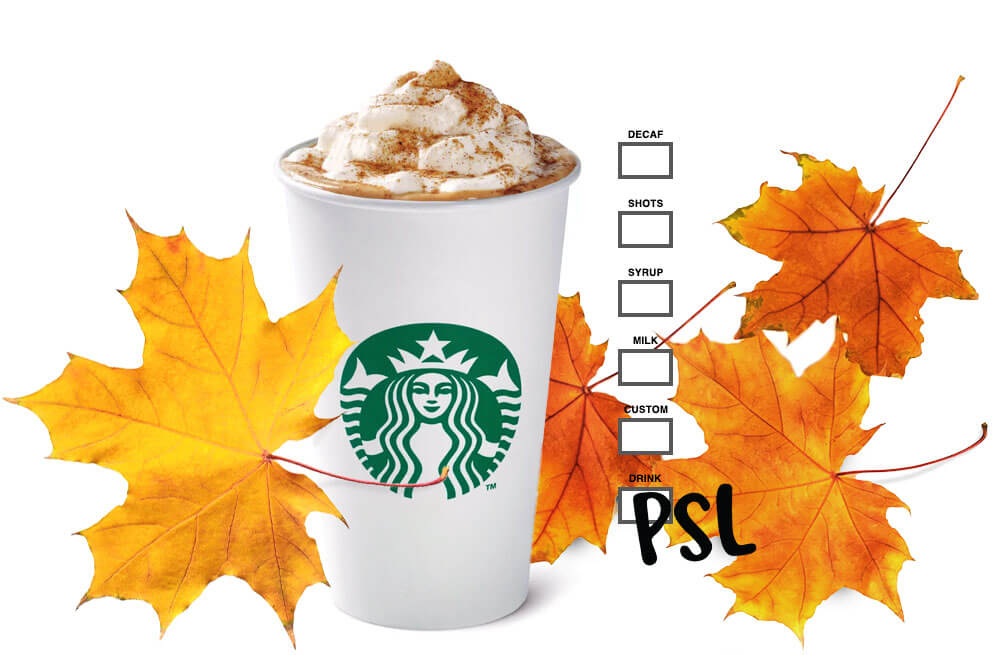 "Take a Pumpion, pare it, and cut it in thin slices, dip it in beaten Eggs and Herbs shred small, and fry it till it be enough, then lay it into a Pie with Butter, Raisins, Currans, Sugar and Sack, and in the bottom some sharp Apples; when it is baked, butter it and serve it in."

—Hannah Wolley
The Queene-like Closet
(a cookbook from 1670)
Classic pumpkin pie spice mix, as we know it today, is a blend of allspice, cloves, nutmeg, ginger, and cinnamon with variations that sometimes include mace.

Everything But the Pumpkin
You can do a lot with a pumpkin. You can cut it up and roast it, remove the flesh to make puree for pie or fruit rollups, pickle the rind, or use the shell to serve creamy pumpkin soup. You can carve a goofy grin into it stick a candle or flashlight inside to delight the kiddos at Halloween and ward off goblin mischief. But with all due respect to the King of Winter Squash, the gourd is rather bland tasting without warm, sweet, and spicy seasonings to dress it up. Enter pumpkin pie spice.

Classic pumpkin pie spice mix, as we know it today, is a blend of allspice, cloves, nutmeg, ginger, and cinnamon with variations that sometimes include mace. But the name is a bit of a misnomer. That is, despite the blanket name, and the fact that it is also possible to dry and mill pumpkin into a powder, pumpkin pie spice does not contain pumpkin. 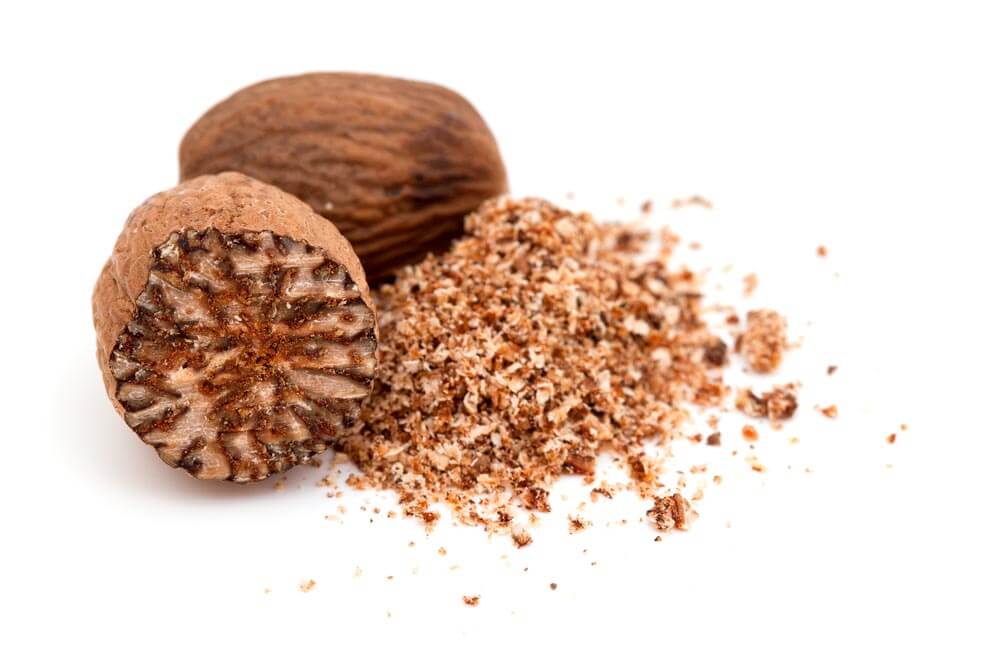 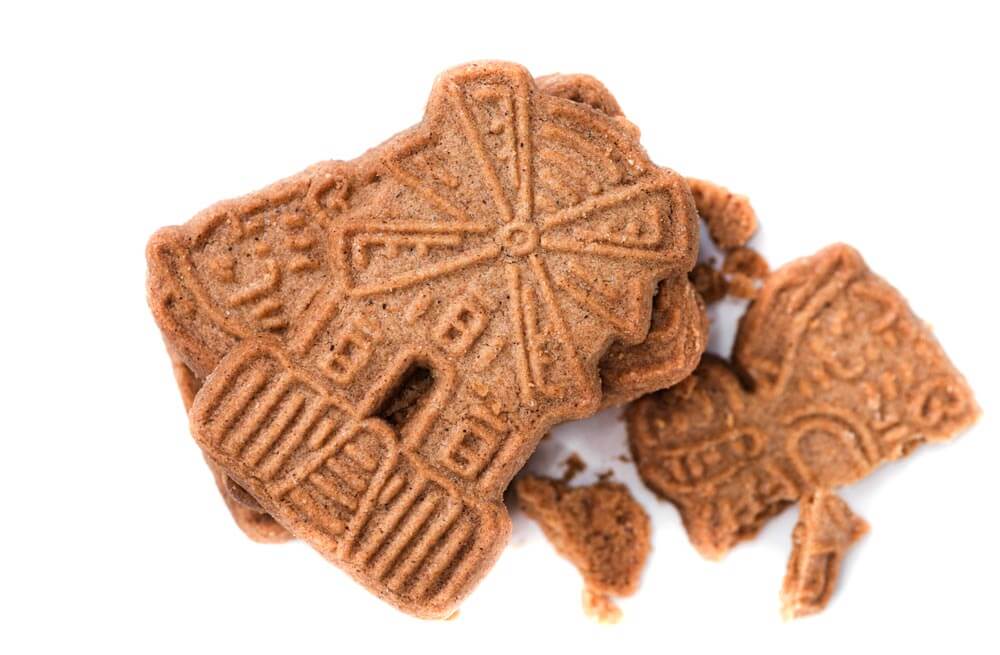 Spice Makes the World Go Round
At the heart of pumpkin pie spice is nutmeg. The demand for this spice in the late 1600s, at the time worth more than gold, inspired the Dutch to trade their colony of New Amsterdam to Britain in exchange for Pulau Run, one of the Banda Islands in Indonesia, the only place where nutmeg was known to grow in those days. The covert arrangement was so safeguarded that the exact location of the island was known only to a few. Today, the island group is known as the Spice Islands and New Amsterdam as New York.

The Dutch developed what may be considered the precursor to modern pumpkin pie spice in a blend called speculaaskruiden, which includes cardamom and white pepper. This is the spice blend that gives distinctive flavor to many baked treats of the Netherlands, such as speculaas, the thin shortbread biscuits also commonly known as windmill cookies.

The name is a bit of a misnomer. That is, despite the blanket name, and the fact that it is also possible to dry and mill pumpkin into a powder, pumpkin pie spice does not contain pumpkin.

Fish by Mrs. Frazer
A culinary arts educator in Edinburgh, known only as “Mrs. Frazer,” became frustrated by the “inaccuracies and obscurities” in the cookbooks of her day that she published her own, The Practice of Cookery, Pastry, and Confectionary, in 1791. In chapter II, dedicated to fish, she described her "mixed spices” to season the cavity of “pot” trout or grilse (a type of salmon) that included “one ounce of cloves, half an ounce of Jamaica pepper [allspice], quarter of an ounce of black pepper, quarter of an ounce of cayenne, two nutmegs, a little mace, and two tea-spoonfuls of ginger,” and the instruction to place the seasoned fish “into a deep earthen jar, with the backs downwards; cover them with clarified butter, tie a paper over the mouth of the jar, and bake them slowly for eight hours.”

Amelia from Across the Pond
The first mention of “baked pumpkin pudding,” or what we recognize as pumpkin pie, didn’t appear in an American cookbook until 1796. In fact, American Cookery by Amelia Simmons had many firsts: it contained one of the earliest published recipes for pumpkin pie, and it was the first cookbook published in the United States written by an American author. On top of that, Mrs. Simmons provided two different recipes for “pompkin pudding,” one which called for ginger, and allspice, and the other for ginger, allspice, and mace.

Going Out of Our Gourds
Believe it or not, pumpkin spice mix wasn’t packaged as such in the United States until 1934, when McCormick moved on the marketing opportunity that the debut of Libby's canned pureed pumpkin in 1929 afforded. Fast forward 88 years and pumpkin pie spice has held its reign as one of the longest-running “it” flavors known to humankind. In fact, it would be fair to say that America is obsessed with pumpkin-everything, at least seasonally, from specialty coffees and lattes to candles and aroma sprays to beauty products and dog treats. Of course, people may be so attached to pumpkin spice because its flavor and aroma is closely associated with hearth, home, and family gatherings. 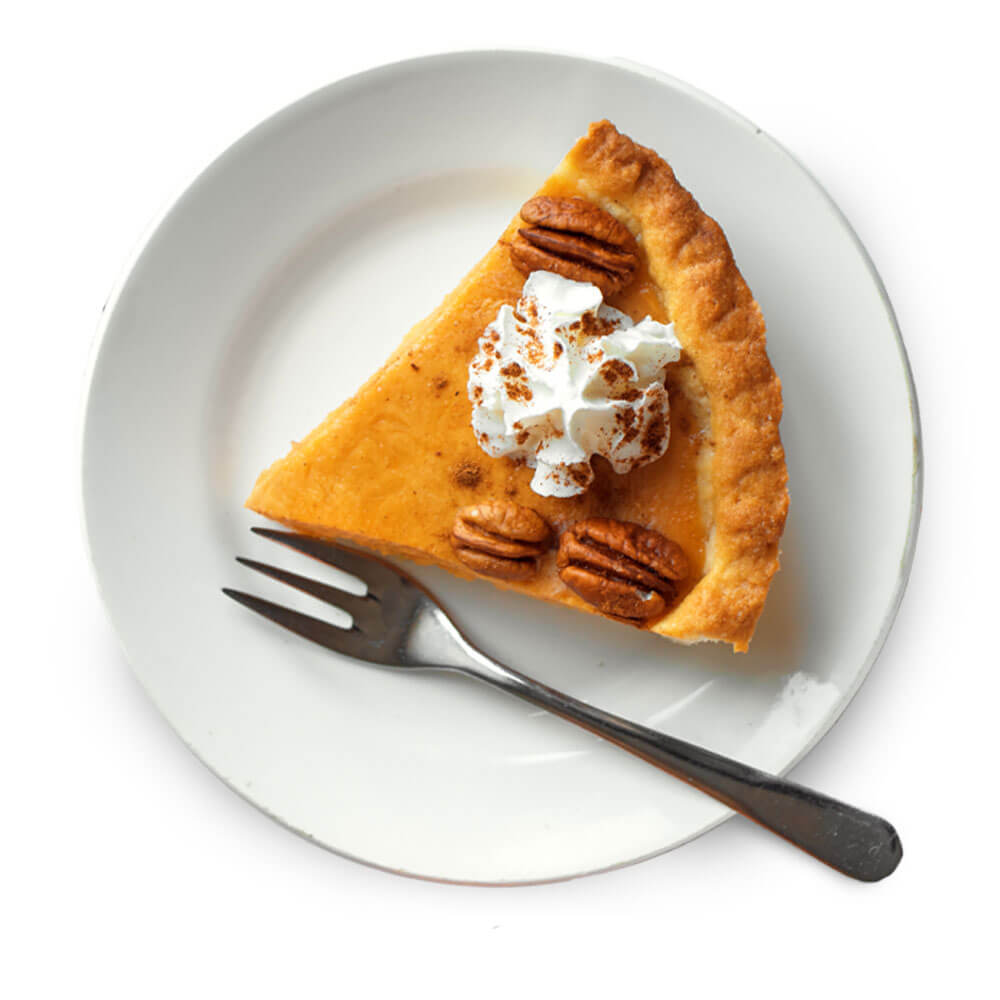 With so many aromatic flavor compounds hitting the olfactory sensory nerve and tongue at the same time, it’s no wonder pumpkin pie spice makes us so nostalgic for the crisp air and changing colors of autumn.
cinnamon
cassia
ground
Ground cassia cinnamon's spicy, warm flavor and aroma star in many homespun fall and winter recipes. Cassia is dominant variety of cinnamon in America.
ginger root
ground
Dried ground ginger is an aromatic and pungent spice with citrusy, even woodsy, notes. Used in baked goods and ginger-flavored favs.
nutmeg
ground
Nutmeg has a warm, sweet, slightly pungent aroma and taste. Ground nutmeg is a clumpy, light colored, orange-brown powder.
mace
ground
Mace's flavor is more subtle than nutmeg, though equally complex. This aromatic spice is warming, semi-sweet, and pungent.
cloves
ground
Freshly ground cloves yield a rich chocolatey brown powder with an intense aroma and a powerful warming flavor.
allspice berries
ground
Ground allspice is highly aromatic and even more pungent than its whole counterpart. As its name suggests it is redolent of a mix of spices including clove, cinnamon, nutmeg and juniper.

MAKE A BATCH FROM SCRATCH

Pumpkin Spice for One, Pumpkin Spice for All
Do-it-yourself types may prefer to make their own pumpkin spice mix. The decision to add more of the sweetness of cinnamon, but less of the pungency of nutmeg, or to include mace and/or cardamom is a personal choice. There is also the benefit of being able to make a large batch of your special blend, which may appeal to dedicated bakers and pumpkin-spiced beverage enthusiasts. In addition to being in control of flavor intensity, there is a certain satisfaction in gathering the ingredients — and perhaps family and friends — together in the kitchen to measure and mix the warm, aromatic spices that make us yearn for warm sweaters, a cozy fire, fresh pumpkin bread from the oven and other comforting rituals that make us fall in love with fall anew each year.

Baby Steps
If you choose to go this route, start small so that you’ll be able to nail down the proportions of spices in your mix that work best for your tastes. There is no one specific formula, but it helps to remember that most pumpkin spice blends consist of these spices in descending order in terms of volume: cinnamon, ginger, nutmeg, allspice, cloves, and occasionally mace.

Making Scientific Scents
That said, there is the science of spice to appreciate. According to the Institute of Food Technologists, pumpkin pie spice mix collectively contains at least 340 flavonoids. The sweet, spicy flavor of cinnamon is owing to cinnamaldehyde, the peppery-woody taste of nutmeg to sabinene, the zest of ginger to zingiberene and the warm, tingling mouthfeel of cloves and allspice to eugenol.

Other players in the flavor party include vanillin and cyclotene, which respectively lend balsamic, brown-sugary and maple-like undertones to the blend. If you elect to add cardamom, you can contribute its unique peppery-minty flavor to the presence of eucalyptol (also known as 1,8-cineole).

With all those aromatic flavor compounds hitting the olfactory sensory nerve and tongue at the same time, it’s no wonder pumpkin pie spice makes us so nostalgic for the crisp air and changing colors of autumn.

Of course, people may be so attached to pumpkin spice because its flavor and aroma is closely associated with hearth, home and family gatherings.
purchase
PUMPKIN PIE SPICE
If you’re in need of a pumpkin spice anything-and-everything fix, we’ve got you covered! Our pumpkin pie spice blend comes in our shaker jar, refill pouch, or large refill pouch. Or if you just need a small amount we have 'try me' samples. Sprinkle pumpkin pie spice generously in:

Better Homes and Gardens: The Fascinating Journey of How Pumpkin Spice Found Its Way into Our Lattes
History.com: 'Pumpkin Spice’ Has Been a Thing for 3,500 Years
Institute of Food Technologists: Pumpkin Spice 101
Food Crumbles: Cardamom science — What is its flavour made of?
Tasting History with Max Miller: Pumpion Pie from 1670