the journey from
CACAO TO COCOA
BEANS TO BITTERSWEET

CACAO: AN ANCIENT CASH CROP
For thousands of years, humans have gone nuts over the seeds of Theobroma cacao, a tropical evergreen in the mallow family that thrives in the Amazon rainforest. Also known as the cacao tree, its scientific name translates from the Greek theos and broma to mean “food of the gods.” To the Mesoamerican people who first cultivated the tree as a food crop, most notably the Mayans and Aztecs, cacao seeds were so highly valued that they were used as currency.

Before cacao beans became popular the pulp of cacao fruit was used to make a fermented beverage; it was often flavored with vanilla or other spices.

When Spanish Conquistadors conquered and essentially annihilated the Incan and Aztec Empires in the 16th century, they took a special interest in this crop, especially in its use in preparing a beverage called cacahuatl intended for ceremonial use. However, the Spaniards added spices and sugar to the brew to counter the bitter flavor, in effect creating what could be considered the precursor to modern hot chocolate. In fact, the word “chocolate” is a blend of two words in the Nahuatl language spoken by the Inca, Maya and Aztecs that merges cacahuatl (cacao bean) with chocolatl, which means “hot water.” 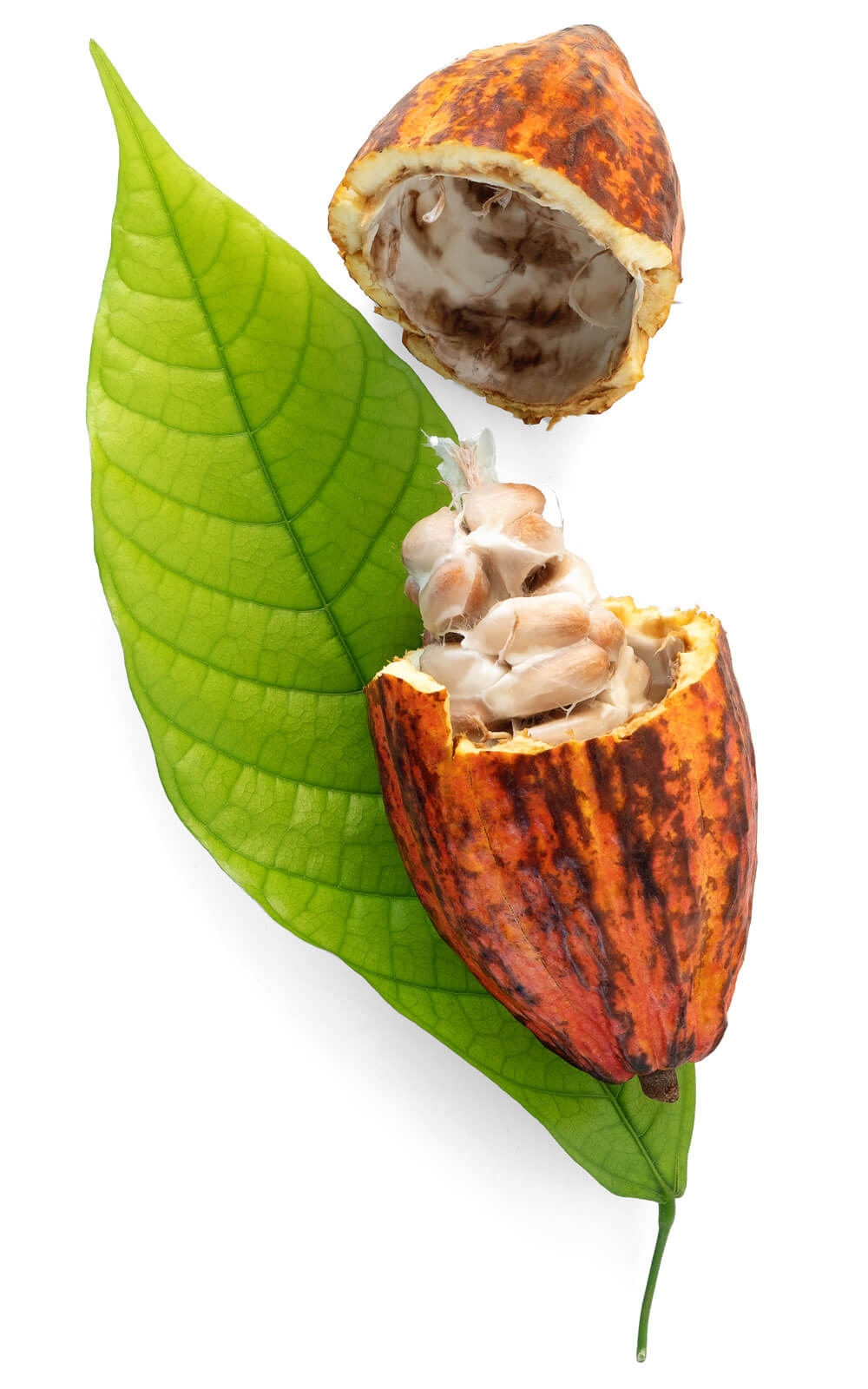 Harvesting of cacao pods is done by hand—using a curved knife affixed to a long pole. To allow for future pods to grow, the stems must be trimmed from the tree without damaging the connection to the cacao trunk.

YOU SAY "COCOA," I SAY "CACAO."
Historically cacao and cocoa weren’t the same—even though currently the names tend to be used interchangeably. Both are derived from the same source: cacao beans. Just as black, oolong, green, and white teas all come from the same plant but are more or less processed, cocoa is usually used to denote a more processed version of cacao.

Cacao nibs are simply broken pieces of the raw seeds (aka "beans"). The cacao beans undergo "sweating" (fermentation) and are then dried and cracked to yield small dark bits that are then winnowed to remove the chaff. Resulting cacao nibs are sold raw in this state, or are sometimes lightly roasted at a low temperature to reduce bitterness and develop a deeper chocolate flavor.

Cacao powder is made by cold pressing the non-roasted cacao. This also reduces bitterness, but more importantly to the process it reduces the fat content to anywhere from 10% (industry requirement) to 20% (considered "high-fat" and more highly prized). The fat is extracted in the form of highly valuable cocoa butter. Interestingly, the powder is where all of the chocolately flavor resides, and so powdered cacao is the most concentratated version of chocolate. 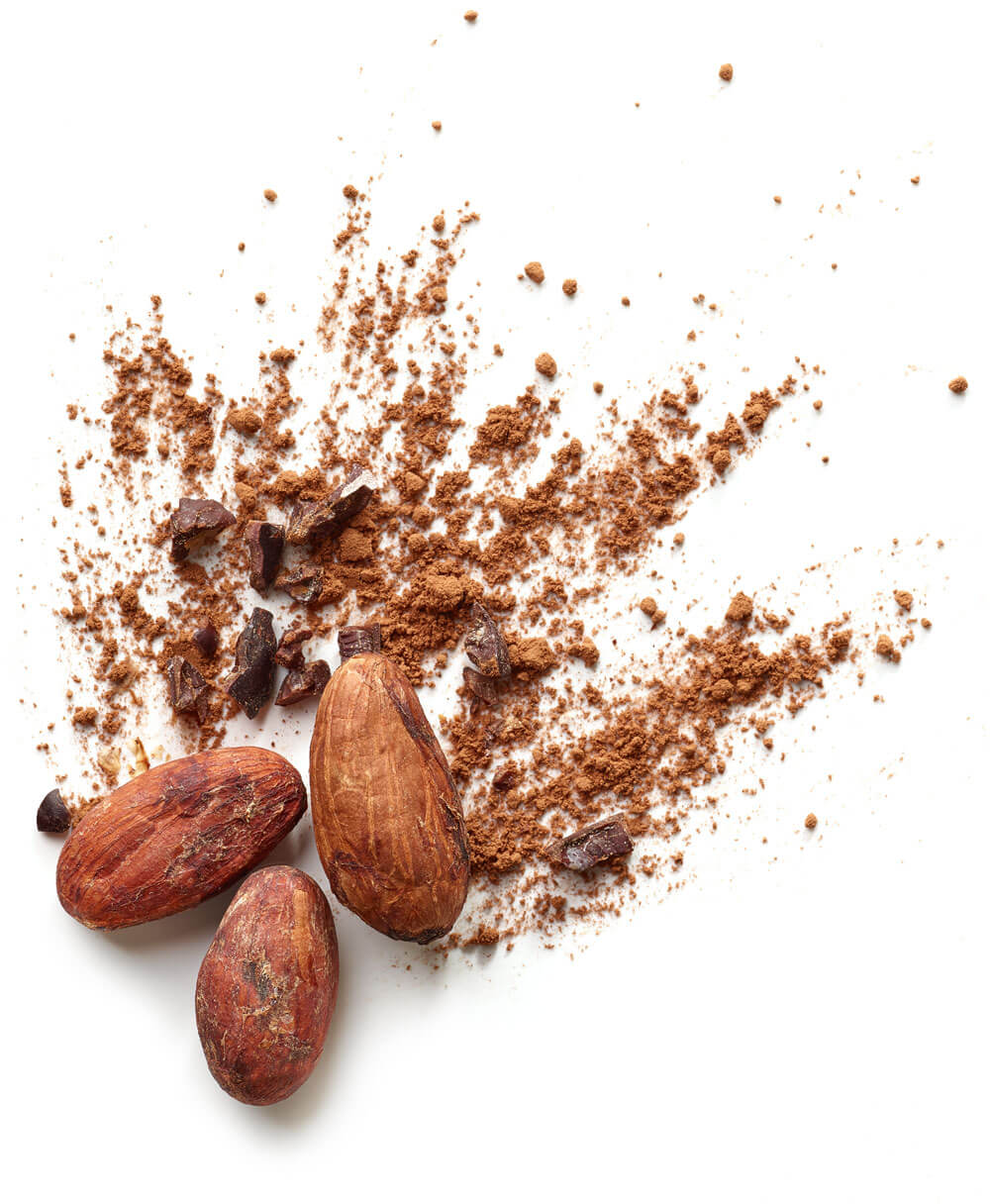 MAKING HOT CHOCOLATE WITH CACAO OR COCOA?
Cocoa is made when solids are pressed from beans roasted at a high temperature and most of the cocoa butter content is removed. This product is typically supplemented with sugar. Prior to pressing and heating, the beans may also be alkalized with a wash of potassium carbonate to reduce bitterness. This process, known as "Dutching," is named after Coenraad Johannes van Houten, the 19th century Dutch chemist and chocolatier who introduced the method, as well as the hydraulic press used to pulverize the "cake" of cocoa solids into powder. The final product is what we know as Dutch-processed cocoa.

Consumer brand Hot Cocoa Mixes attempt addictive taste with minimal effort and therefore tend to have more ingredients added: corn syrup, milk solids, hydrogenated coconut oil, salt, whey. This is so that all that is required is hot milk — or even just hot water — to make a quick cup of hot chocolate.

CACAO ADVANTAGES
Conversely, 100% cacao powder (or nibs) are natural and contain no sweeteners or milk products; preparing hot chocolate with cacao allows for the nuances of cacao's rich complexity to unfold in your mug; addtional sweeteners or creamers can be added to taste to complement instead of dulling the drink to one sugary note. We offer up some additional spice pairings below in order to assist you in further elevating your hot chocolate game. And some recipes too.

cacao nibs
nibs
Cacao nibs are broken bits of fermented cacao bean. Use their chocolatey bite for a tasty crunch on yogurts and smoothies.
cacao powder
high fat (20-22%)
powder
Unsweetened and high in fat this luxury natural cacao powder will yield rich chocolatey flavor in baked goods.
Grinding cacao nibs doesn't produce a powder in the way one might expect. The high fat content (extracted as cocoa butter) means that the nibs will become a syrup or "liquor" when ground.

IN THE ROOM WHERE IT HAPPENS
While the terms "cacao" and "cocoa" are not interchangeable (despite some chocolatiers persistently treating them as such), they can be used together or as substitutes for each other in the kitchen. Nibs and powders made from Nacional cacao offer a flavor profile that is fruity with floral notes reminiscent of jasmine that is compatible with a variety of herbs and spices to harness its complexity.

A LEGEND LOST IS FOUND AGAIN
Nacional cacao nibs are dry roasted and impart a mildly bitter, chocolate-like flavor to baked goods, coffee and tea blends, Mexican mole sauces, cooked cereals, smoothies and other foods. Because they are minimally processed and void of additives, their mineral content (magnesium, potassium and iron) and concentration of polyphenols — a group of plant antioxidants that includes anthocyanins, procyanidins, flavanol glycosides and catechins — remain intact. Similarly, our cacao powder is not the variety subjected to alkalizing agents, which might otherwise diminish the nutritive value of these compounds. In addition, both nibs and powder are naturally vegan and free of gluten, dairy and nut allergens.

Nacional is an heirloom variety unique to Ecuador and Peru. Although this variety of cacao bean has been cultivated since pre-Columbian times, aggressive crossbreeding with high-yield, disease-resistant cultivars in the 18th and 19th centuries led to extinction by the mid-21st century – or so scientists thought. In 2013, a strand consisting of nearly 50 old growth cacao trees were discovered in the valley of Piedra de Plata in Ecuador, and subsequent DNA analysis confirmed the presence of genetically pure Nacional cacao. Today, this variety of cacao bean, which we source from small farms in Ecuador, is now the rarest and still the most prized in the world.

Nacional cacao nibs are dry roasted and impart a mildly bitter, chocolate-like flavor. They are minimally processed and will provide a natural crunchy texture to smoothies or yogurts.

recipes that use
CACAO POWDER or CACAO NIBS

The ubiquity of hot chocolate in winter has done nothing to lessen our desire for the sweet treat.