What do a bowl of curry, a stick of sugarless gum and a splash of Clive Christian X cologne for men all have in common? They all contain cardamom! If you think you’re not yet acquainted with this exotic spice, think again. Cardamom is the antibacterial agent found in many dental and personal care products, the top note that elevates soft, woody tones in perfumery, and the flavoring that lends a peppery, citrus-like nuance to specialty coffees and lattes, cookies, breads and lots of other sweet and savory bakery treats.

You may not have known it was part of your life before now, but you would miss it if it weren’t. If cardamom doesn’t already reside in your spice cabinet, it’s time to roll out the red carpet for the Queen of Spices. 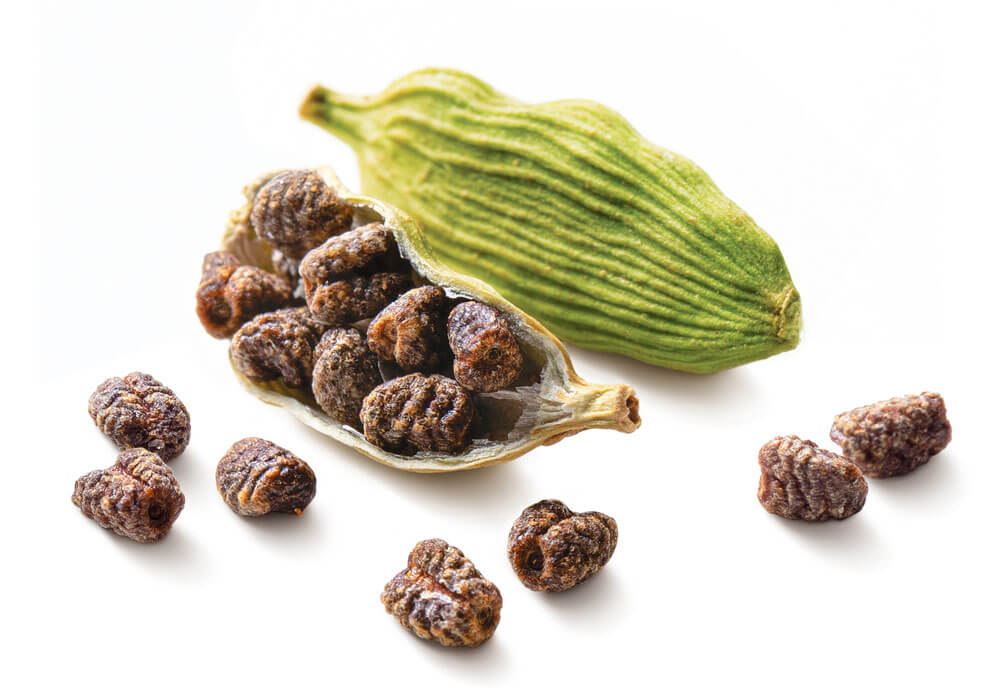 Cardamom’s top note elevates soft, woody tones in perfumery, and its flavoring lends a peppery, citrus-like nuance to lots of different sweet and savory baked treats.
Extensive care and labor goes into cultivating cardamom. It takes three to four years for the plant to reach maturity and produce flowers that transform into the familiar triangle-shaped pods.

Cardamom Basics
Cardamon (Elettaria cardamomum) is an evergreen perennial in the Zingiberaceae family, which includes turmeric and ginger. While the latter are harvested for their rhizomes, the triangle-shaped pods that house 15-20 aromatic seeds are the prize of the tropical cardamom plant. It takes three to four years for the plant to reach maturity and produce flowers that transform into these receptacles. The unripe, green pods are then harvested by hand in early October, before they can burst open and disperse their contents. The extensive care and labor that goes into cultivating cardamom explains why it is the third most expensive spice in the world after vanilla and saffron. (See ref 1)

In addition to be being one of the priciest spices in the world, cardamom is also one of the most ancient of spices with a history of cultivation that spans more than 4,000 years. As trade routes expanded under the Holy Roman Empire, the spice migrated from its native tropical regions of India, Sri Lanka and Burma to the Middle East and Europe. Whether due to the Vikings trading with the Byzantine Empire or the settlement of the Moors in the Iberian Peninsula, cardamon eventually reached Scandinavia, which is the third leading consumer of cardamom today after India and the Middle East. Thanks to a German coffee grower who took a risk on cultivating cardamom alongside his coffee plants in Guatemala in the early 1900s, the country surpassed India in production and remains the largest exporter of the spice in the world today. Ironically, however, cardamom is not embraced in the local cuisine as it is elsewhere around the globe. In fact, nearly all of it is exported.

Kardemumma bullar (or kardemumma knutar, if twisted into knots) are traditional Swedish buns featuring cardamom. They are among some of Sweden’s most popular buns along with kanelbullar, their cinnamon buns.

Around the World We Go
As a native of southwest India, cardamom is an essential ingredient in many regional foods and beverages, most notably biryani (vegetables and meat with rice) dahl (red lentil stew), kheer (Indian rice pudding) and <masala chai (spiced tea). A seasoning blend called Baharat (also known as Lebanese seven-spice blend), which gets its name from the Arabic word for “spices,” combines cardamom with coriander, allspice, black pepper, cumin and other spices and lends warm, spicy flavor to stews and tagines (slow simmered stew). A mere sampling of other traditional Middle Eastern dishes that are cardamom-based include flaky baklava pastry, man’oushe (a pizza-like flatbread) malfouf (cabbage rolls), ab-nabat gheichi (caramelized hard candy) and gorayba (shortbread cookies).

In the Nordic countries, cardamom is widely used in baked goods and to flavor poaching liquids and beverages. In Sweden, it is the star of Inlagd makrill med rödbetssallad (pickled mackerel with beetroot salad) and Kardemummabullar (cardamom buns). The Danes enjoy Fødselsdagsboller (“birthday” rolls) and gløgg (mulled wine), both of which feature cardamom. The Finnish celebrate cardamom with a traditional braided bread called pulla and korvapuusti, a bun that marries cardamom with cinnamon and is finished with a sprinkling of pearl sugar. 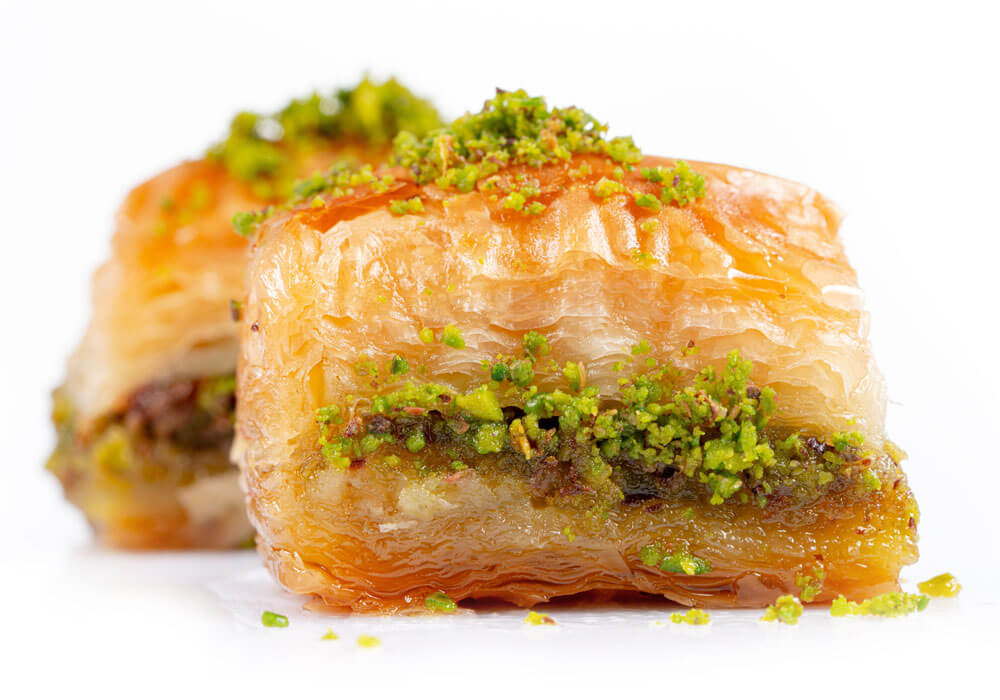 Less is more
Cardamom provides a distinctive, complex flavor that gives bite to foods and beverages when used with restraint. A little goes a long way, in other words. Too much of the spice and the meal takes on a resinous, medicinal taste followed by an astringent mouth feel. Remember: We want the Queen of Spices to rule, but not dominate the dish. It should also be noted that cardamom pairs best with mild but refined flavors rather than overly sweet or tart flavors that compete for attention. Among fruits, for example, the spice heightens the flavor of apple pie and poached pears. Acidic citrus fruits also stand up well to cardamom, making the spice a subtle complimentary flavoring in lemonade, citrus fruit salads, simple syrups, compotes and marmalades.

When pairing cardamom with other foods, it helps to remember the complexity of its quirky flavor profile in terms of layers. At first bite, cardamom unloads a warm and woody taste to the tongue, which quickly morphs into pungent and peppery followed by a hit of piney-citrusy and slightly camphorous notes. To illustrate, imagine the combined flavors of ginger, nutmeg, cloves, licorice, eucalyptus and black pepper. That’s a lot to unpack, but cardamom delivers these characteristics with grace and perfect balance.

Whole pods are best for using crushed in liquid foods where its flavor can be infused; decorticated seeds are usually ground before use but will hold their freshness longer than purchasing pre-ground.

Whole pods: The outer hull of the pod is quite intense in flavor. Toss a few whole pods into a dish before cooking and remove before serving. To enhance flavor, toast the pods in a dry skillet just until fragrant, and crush slightly before adding to the dish. Whole pods work best in curries, poached and braised foods, mulled wines and other creations that involve liquid. (Tip: Drop one or two into a freshly brewed cup of strong coffee or add to tea blends.)

Decorticated cardamom: The benefit to buying this form is that you don’t have to crack the pods yourself. But you do want to grind the seeds using a mortar and pestle or spice grinder just before using for fresh flavor and to avoid the unpleasant and potentially painful experience of biting into one. (Tip: Brew whole seeds along with coffee grounds, about ¼ teaspoon per cup.)

Ground cardamom: This is the most convenient form to use and works in just about all cooked or roasted foods, baked goods, coffees and teas. Put on your favorite apron and whip up a batch of Kardemummabullar!

It helps to remember the complexity of cardamom's quirky flavor profile in terms of layers: imagine the combined flavors of ginger, nutmeg, cloves, licorice, eucalyptus and black pepper. That’s a lot to unpack, but cardamom delivers these characteristics with grace and perfect balance.

recipes that use
CARDAMOM

As noted above, this penetrating spice can be found in both savory and sweet dishes alike. Cardamom is an aromatic spice that when added to your cooking can lend dishes slightly exotic flavor notes, along with its spicy warmth.